In 2012, we at reelyActive introduced the reel, a novel concept which allows sensors to be quickly and easily daisy-chained using standard network cables which provide both power and communications. Based on the co-founders previous experience with wireless RFID readers and camera infrastructure deployments — power and networking were always the primary point of failure — the reel was designed to deliver both power and communications reliably and cost-effectively over a single, ubiquitous cable.

In 2013, we chose to publish, rather than patent, the reel concept. Our scientific article Towards a Simple, Versatile, Distributed Low-Power Wireless M2M Infrastructure was presented at the 1st IEEE M2MCIP Workshop in Sydney, Australia. We'll spare the scientific details here and instead focus on the practical aspects of deployment and integration of the reel.

The name reelyActive is indeed a combination of reel and active — the latter referring to active radio-frequency identification.

The reel relies on a ubiquitous cable type consisting of four unshielded twisted pairs (UTP) of insulated wires with 8P8C plugs on either end. These are commonly generalised as "network" cables. Specifically, the reel requires the following:

Indeed, "network cables" rolls off the tongue much better than "Cat5e with T568B 8P8C plugs", and the following image should provide clarity. 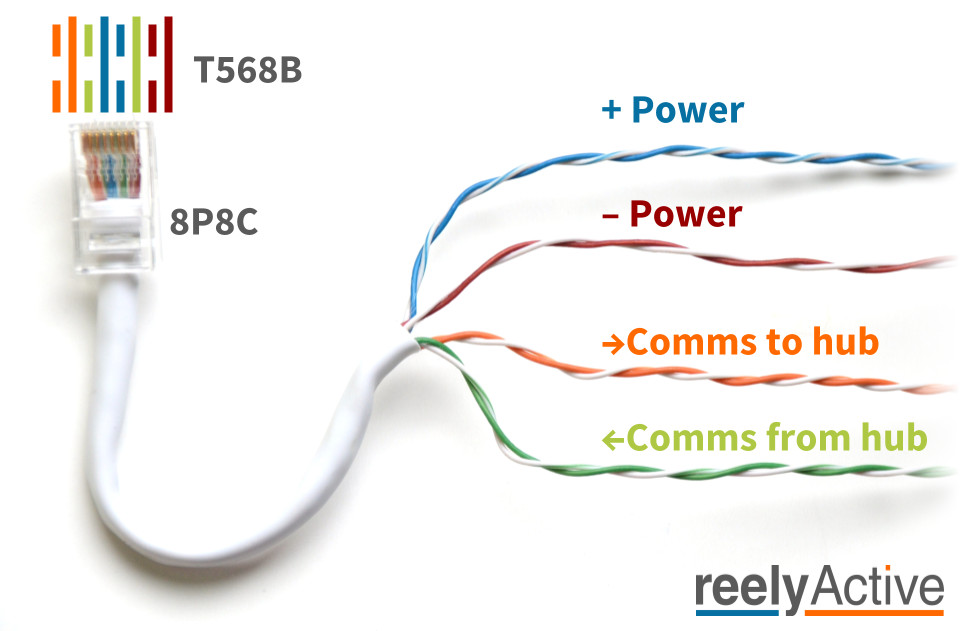 Reel ≠ PoE
It's not Power over Ethernet.
It's not even Ethernet!

While the reel is inspired by PoE Alternative B (power over spare-pairs), it in fact uses RS-422 rather than Ethernet and supports voltages between 5VDC and 45VDC as we'll detail below. Should you accidentally connect a reelceiver to standardised PoE power sourcing equipment (PSE) — it happens! — rest assured that both devices are designed to fail-safe.

The blue and brown pairs carry power from a single source to all devices on the reel. The blue pair is positive and the brown pair is negative. "Brown is ground" can be a helpful mnemonic.

Applied (non-transient) potential above 60VDC may damage the devices on the reel.

The orange and green pairs carry balanced serial communications from reel to hub and from hub to reel, respectively. Communication respects the RS-422 technical standard which provides reliable differential signalling over long distances.

Should you intend to push the limits of RS-422, this TI Application Report will likely prove helpful.

The above diagram illustrates the following:

The above diagram illustrates how power is routed from reelceiver to reelceiver (blue and brown pairs), passing through a filter at each. The filter is a passive circuit providing:

If the host computer natively supports RS-422 and/or RS-485, interfacing is as simple as connecting the orange and green pairs to the RX and TX terminals respectively. The orange pair should be terminated with a 100 Ohm resistor (across the pair).

If the host computer has but a UART, a simple interface circuit consisting of a single active and passive component is required, for example the following.

Microcontrollers which support 3.3V I/O can connect to the reel with the following circuit comprising a TI SN65HVD379 and a 100 Ohm resistor.

A reference design of this circuit, t2-reel-module, which interfaces with a Tessel 2 hub, is available as open hardware on Upverter, and can be easily adapted to other microcontrollers. Please let us know if you do so we can share with the community!

Our open source barnowl middleware package interprets the reel packets which it outputs as JSON.

Don't give a hoot about hardware integration?

Our Pareto platform combines the convenience of SaaS with plug-and-play hardware. Leave the hardware integration to us.

Learn more about our barnowl middleware package, learn how to install a reel-to-USB or reel-to-IP starter kit, or return to the diyActive home page.